A Re-Spin on Streamers 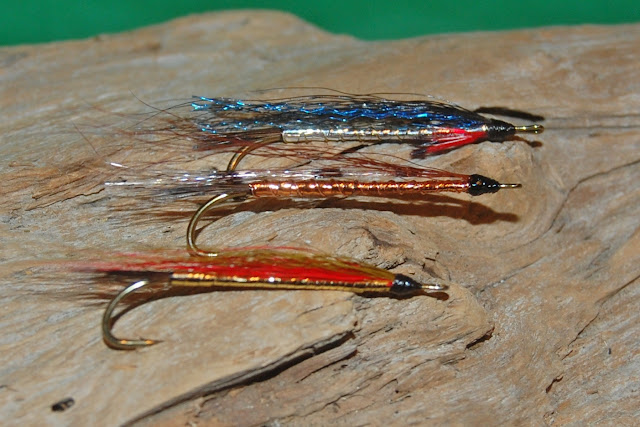 Like most of us, I came to trout fishing as a spin fisherman.  I don’t hang my head to that fact & am proud of my youthful years hunting trout.  I learned to trout fish in ultra-lite fashion, where 5x mainline & 7x tippet bearing a #16 hook was the norm.  I learned to read water as a spin fisherman. I learned the feeding habits of trout and how to identify feeding lies and lanes as a spin fisherman.  They were good years, and provided a strong foundation to build on as a fly fisherman.  During those years my fly fishing was mainly panfish and small bass with store-bought Gaines & Betts poppers.  Little did I realize then, that it would end up being one of my passions through most of my adult life.
One of the other things that spin fishing taught me was a very effective and minimalist approach to spinners. Early on, my father gave me some very usable advice while I was admiring the spinner wall in a local sporting goods shop.  He informed me that there were really only 3 requirements for spinners when fishing for trout. They were in order:
These requirements usually took the form of a CP or Swiss Swing, or the classic Colorado spinner. And the copper was filled with a Rooster Tail or a Mepps.  But a good spin fisherman with ½ dozen of each of the 3 groups could expect to limit out in any water and under most any conditions. And to his credit, I found his advice to be correct over the years.
Fast forward 35 years.  I am looking at my boxes for the season, and come to my streamer box. As a young fly fisherman coming to speed in the fly fishing world of the Pacific Northwest, I was drawn to chasing the runs of steelhead, salmon, and my favorite of all the Coastal Cutthroat trout. I like the Cutts most of all because they are aggressive feeders and make no bones about what they intended to eat once their mind was made up. A fish created perfectly for fishing streamers.  Streamers then meant anything that would work. From Muddlers to Leeches, and classics like the Black-Nosed Dace & Wooly-bugger, my boxes were filled with them.  But as often is the case with fly tyers there is always a search for the “better fly”, or the perfect pattern so-to-speak.  So I was always trying to tweak patterns, or mimic the fry or smolt that I found in the local waters.  Sometimes they would out fish the classics, and other times they would go by the wayside. Now 20 years after 1st chasing Coastal Cutthroat I was looking at my fly box, and realized once again, that my father was right. It was staring me right in the face as perfectly as my classic-styled bucktail streamers were aligned in my box.  Oddly enough, there were only 3 that I still tied regularly and fished each season.  They were in Order:
Well, it is now 41 years later,  and while my thoughts on this topic remain unchanged, my choice of patterns have changed slightly. For the past 15 years of fishing primarily Pennsylvania and New Jersey waters, here are the 3 patterns that now fill my box.

1- The Northwest Jack
2- The Firehole
3- The Lost Penny

I like to fish streamers for trout in down-and-across fashion, methodically working my way downstream. I prefer a 5-6 weight glass rod. Gone are the sink tips, replaced by an aggressive taper WF floating line. Leader configuration is a 5’ Furled mono leader with a mini-barrel swivel and 4 feet of 5X  Fluorocarbon.
The years of tying and fishing streamers had by complete chance brought together a trio of bucktails that not only were tied years apart, but were tied to target 3 completely different waters.  Yet in the end, they combine for an unbeatable trio of trout streamers for most any water or water condition. Now, years later, those patterns are adjusted a bit, but the important aspects remain the same. Folks often repeat the phrase “All I really needed to know about life I learned in Kindergarten”.  Well, I guess I can say that “All I really needed to know about Streamers, I learned at the age of 10 in a bait shop”.  Funny how things work out, and how slow we are at times to grasp early advice. 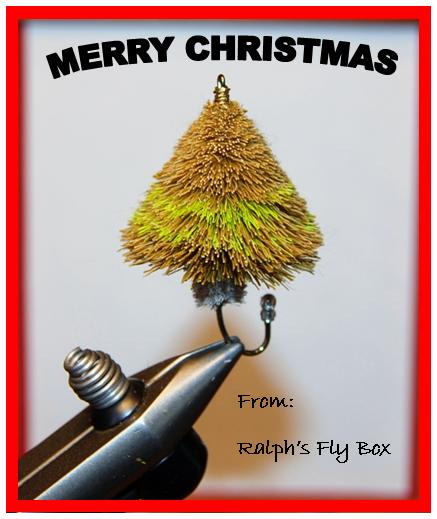 Many wishes for a safe and enjoyable holiday to all!

Staying within holiday traditions and as a special thanks to all who frequent the blog, I am offering a signed sketch to the winner of the 1st Annual Ralph's Fly Box Christmas drawing.

Simply post to this blog entry today through 12 noon on Friday the 23rd. We will draw from all the posts Friday evening & post the winner.

The drawing will be for a matted & signed print. 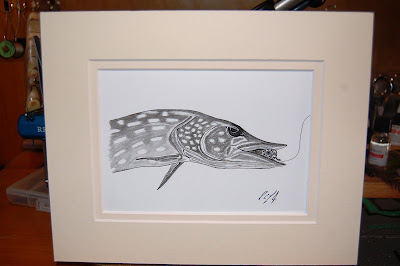 Tying the No Name Midge

The Boy on the Bank

The boy sat intently observing from his perch on the stream bank above, like a miniature gargoyle watching all that was upon the stream. The object of his attention was an elderly fisherman with what appeared in the mind’s-eye of the boy to be a magic wand, as he laid out long graceful loops with a cast that looked nearly impossible. The pale blue line made no sound, except for the occasional “clicking” as the man would appear to pull more line off of his reel, extending his casting loop even further.  He watched on as the line would lay itself out effortlessly and the man would then stand motionless as only his head and rod tip would follow the line on the water. The process would be repeated several times, and then the man would step upstream with the aid of a wading staff and repeat the process. Occasionally he would hook and land a fish, only to bring it to hand for a second and then allow it to slip from his fingers, back into the stream. The boy was mesmerized as the man slowly worked his way upstream towards where he sat. And as the man got closer, the boy worked his way down nearer to the waterline across the stream to watch first hand what the elderly gentleman was doing exactly.  His own spinning rod lay in the grass above him as he stared on. The man went on to catch three more fish as he watched…..the way he set the hook, played the fish and handled them before releasing them all being cataloged in the boy's mind.  The last fish was a fat and brightly colored brown and he couldn’t help but yell across “nice fish!”. The fisherman looked up from beneath the brim of his cap and smiled at the young boy.  “It sure is” he replied. Then let the fish slip from his hands back into the stream. He was done fishing at that point, as he waded with a bit of trouble out onto the far bank, turned and waved to the boy, then walked downstream. The boy, watching all along until the fisherman rounded the bend below and walked out of sight.

A short while later his father and uncle made their way from the pool above and asked how he had done. The boy showed them the 3 fish in his creel and his dad smiled large in approval, congratulating him. He then explained to them how he could have caught a few more, but he was enjoying watching a man with a fly rod work the the pool, and he had lost track of what he was doing while observing. His dad agreed that it did look like fun, but that he had never owned a fly rod, so he never really had ever tried it. The boy however could not help but talk about what he had seen that morning. A fact that seemed to remain a common theme throughout the rest of that autumn and into the winter months.  Eventually however, the stories and remarks got shorter, and the thoughts faded.

No thoughts were on the boy's mind as he settled in, taking a seat on the living room carpet between his brother and sister in front of the Christmas tree.  Until he spied the tall wrapped item leaning in the corner behind the tree.  “Could it be?” he thought. His hands shaking as he held the wrapped package. Indeed inside he found a 7 foot tan Daiwa  fly rod, and in a box next to it was a clay-red South Bend fly reel exactly like the man he watched fish had been using. Later that day, he would cast in the snow covered driveway until his fingers were numb and his mom instructed him to come back inside before he caught his death of cold. It would be a long winter.

Standing motionless in the stream on opening day,  watching the line drift along with the current, the line tip darted forward a short inch and the rod came up crisp but controlled. The weight of the fish on the rod, an amazing feeling. Rolling the fish left and right to wear it out as he had watched, the little brown trout came to hand with ease. A quick slip of the hook and a moment to admire, then off it slid back into the dark green waters of the pool before me. Though the little Daiwa rod was long gone over the years, for a moment I was that little boy again.  Holding my present rod under my left arm, I reach for my wading staff and made my way back to the bank behind me, pausing to look out over the pool for a short moment longer and seeing myself sitting quietly on the far bank so many years ago. Turning, I made my way downstream to the parking area where I had been able to wade across and reflecting I realized, the gracefulness of the casting loop still held it’s magic.