The Nisqually Sunset is a low-water salmon pattern given to me by a fisherman I would bump into while fishing for sea-run Cutthroat along the gravel beaches in the Nisqually River basin, in the early 90's.  After going without a fish through an entire afternoon as I watched him land fish after fish, he was generous enough to offer up a sample for me to take home.  I am assuming it was a personal pattern of his since I have never found the pattern elsewhere. 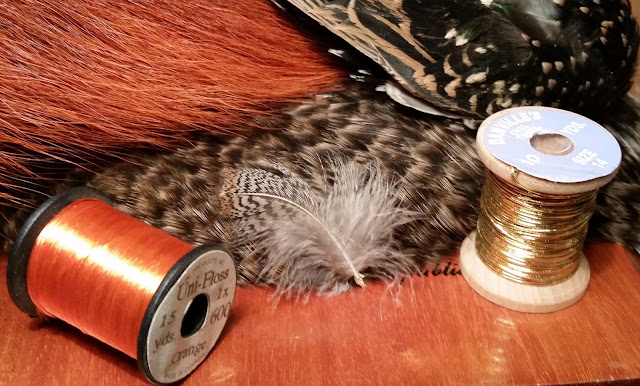 Originally tied on a low-water salmon hook with Grizzly wings and Jungle Cock eyes, I have modified it slightly over the years to fit my on-hand materials, while eventually tying it as a trout streamer in Rangeley fashion. Tied with both Cree or Grizzly winging to adjust light or dark and Starling shoulder for the eyes, the result has been a solid streamer for eastern trout.

Wing:  Cree or Grizzly Hackle 2-each side